THE BLACK INTERNET or DARKNET (C)

PentesterLab is an easy and straight forward resource on how to learn Penetration Testing with Pentesting Lab Exercises. It provides vulnerable systems in a virtual image and accompanying exercises that can be used to test and understand vulnerabilities.

Just decide what course you want to follow, download the course and start learning. You can easily run the course using VMware, no Internet access is required.

So what do they provide actually?

PentesterLab – How To Learn Penetration Testing

There is also this to check out if you’re into learning more: eLearnSecurity – Online Penetration Testing Training

You can find all the Free modules here:

PentesterLab – Our Exercises – Only Free

These are basic techniques but very useful when penetration testing any Windows based network, the techniques were discovered on WinNT but are still very valid on Windows2000 and in some cases Windows2003 due to backwards compatibility.

This article is being written in a procedural manner. I have approached it much like an intruder would actually approach a network penetration. Most of the techniques discussed in this text are rather easy to accomplish once one understands how and why something is being done.

When targetting a given network, the first thing an intruder would do, would be to portscan the remote machine or network. A lot of information can be gathered by a simple port scan but what the intruder is looking for is an open port 139 – the Default NetBios port. It’s surprising how methodical an attack can become based on the open ports of a target machine. You should understand that it is the norm for an NT machine to display different open ports than a Unix machine.

Intruders learn to view a portscan and tell wether it is an NT or Unix machine with fairly accurate results. Obviously there are some exceptions to this, but generally it can be done.

Recently, several tools have been released to fingerprint a machine remotely, but this functionality has not been made available for NT.

Information gathering with NetBIOS can be a fairly easy thing to accomplish, albeit a bit time consuming. NetBIOS is generally considered a bulky protocol with high overhead and tends to be slow, which is where the consumption of time comes in.

If the portscan reports that port 139 is open on the target machine, a natural process follows. The first step is to issue an NBTSTAT command.

The NBTSTAT command can be used to query network machines concerning NetBIOS information. It can also be useful for purging the NetBIOS cache and preloading the LMHOSTS file. This one command can be extremely useful when performing security audits.

Interpretation the information can reveal more than one might think.

The column headings generated by NBTSTAT have the following meanings:

Unique (U): The name may have only one IP address assigned to it. On a network device, multiple occurences of a single name may appear to be registered, but the suffix will be unique, making the entire name unique.

Group (G): A normal group; the single name may exist with many IP addresses.

Multihomed (M): The name is unique, but due to multiple network interfaces on the same computer, this configuration is necessary to permit the registration. Maximum number of addresses is 25.

Internet Group (I): This is a special configuration of the group name used to manage WinNT domain names.

An intruder could use the table above and the output from an nbtstat against your machines to begin gathering information about them. With this information an intruder can tell, to an extent, what services are running on the target machine and sometimes what software packages have been installed. Traditionally, every service or major software package comes with it’s share of vulnerabilities, so this type of information is certainly useful to an intruder.

This information would give the intruder a list of shares which he would then use in conjunction with the net use command, a command used to enable a computer to map a share to it’s local drive, below is an example of how an intruder would map the C Share to a local G: drive which he could then browse:

However, If the intruder was targetting a large network rather than a single remote computer, the next logical step would be to glean possible usernames from the remote machine.

A network login consists of two parts, a username and a password. Once an intruder has what he knows to be a valid list of usernames, he has half of several valid logins.

The IPC$ (Inter-Process Communication) share is a standard hidden share on an NT machine which is mainly used for server to server communication. NT machines were designed to connect to each other and obtain different types of necessary information through this share. As with many design features in any operating system, intruders have learned to use this feature for their own purposes. By connecting to this share an intruder has, for all technical purposes, a valid connection to your server. By connecting to this share as null, the intruder has been able to establish this connection without providing it with credentials.

To connect to the IPC$ share as null, an intruder would issue the following command from a command prompt:

If the connection is successful, the intruder could do a number of things other than gleaning a user list, but lets start with that first. As mentioned earlier, this technique requires a null IPC session and the SID tools. Written by Evgenii Rudnyi, the SID tools come in two different parts, User2sid and Sid2user. User2sid will take an account name or group and give you the corresponding SID. Sid2user will take a SID and give you the name of the corresponding user or group. As a stand alone tool, this process is manual and very time consuming. Userlist.pl is a perl script written by Mnemonix that will automate this process of SID grinding, which drastically cuts down on the time it would take an intruder to glean this information.

At this point, the intruder knows what services are running on the remote machine, which major software packages have been installed (within limits), and has a list of valid usernames and groups for that machine. Although this may seem like a ton of information for an outsider to have about your network, the null IPC session has opened other venues for information gathering. The Rhino9 team has been able to retrieve the entire native security policy for the remote machine.

Such things as account lockout, minimum password length, password age cycling, password uniqueness settings as well as every user, the groups they belong to and the individual domain restrictions for that user – all through a null IPC session. This information gathering ability will appear in Rhino9’s soon to be released Leviathan tool. Some of the tools available now that can be used to gather more information via the IPC null session will be discussed below.

With the null IPC session, an intruder could also obtain a list of network shares that may not otherwise be obtainable. For obvious reasons, an intruder would like to know what network shares you have available on your machines. For this information gathering, the standard net view command is used, as follows:

Depending on the security policy of the target machine, this list may or may not be denied. Take the example below (ip address has been left out for obvious reasons): 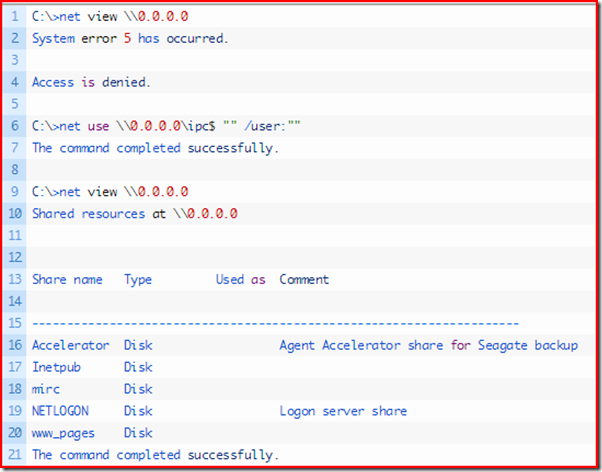 As you can see, the list of shares on that server was not available until after the IPC null session had been established. At this point you may begin to realize just how dangerous this IPC connection can be, but the IPC techniques that are known to us now are actually very basic. The possibilities that are presented with the IPC share are just beginning to be explored.

Once this list of shares had been given, the intruder could then proceed to issue the net use commands as described above.

By By Mr. B10nde – Updated by Darknet