Russia has the means to create its own version of the Internet as a worst-case scenario contingency, according to a high-ranking Foreign Ministry official.

The head of the Russian Foreign Ministry’s Department for New Challenges and Threats, Ilya Rogachev, announced that Russia has the necessary capabilities to create an alternative to the Internet, Russian media reports.

As Rogachev explained, Russia may possibly resort to the “creation of some kind of parallel Internet” due to the actions of the country’s “Western partners” and the double standards they promote.

He also added that while currently Moscow does not intent to implement this move, it has all the “technical, financial, intellectual and other necessary capabilities” to move forward if needed.

Earlier, the German newspaper Sueddeutsche Zeitung wrote that Internet technology is becoming increasingly compromised and militarized, and that the current situation on the Internet resembles a battlefield on the eve of a war.

Hidden in Plain Sight: NSA, AT&T Intertwine to Form Surveillance Web Over US

Among the hundreds of properties owned by leading telecommunications giant AT&T across the United States, at least eight are being used by the US National Security Agency (NSA) to suck up billions of records from internet and cell phone users that don’t even have a contract with the company.

The huge amounts of the NSA’s Data collection comes from “peering” sites, which are used to process data from AT&T customers and also often serve as a midpoint for data generated from other companies because they’re often a more direct or more cost-effective route. Due to the pervasiveness of US telecom infrastructure, huge amounts of global traffic makes its way in through US borders. Meanwhile, AT&T runs 19,500 “points of presence” in 149 countries. 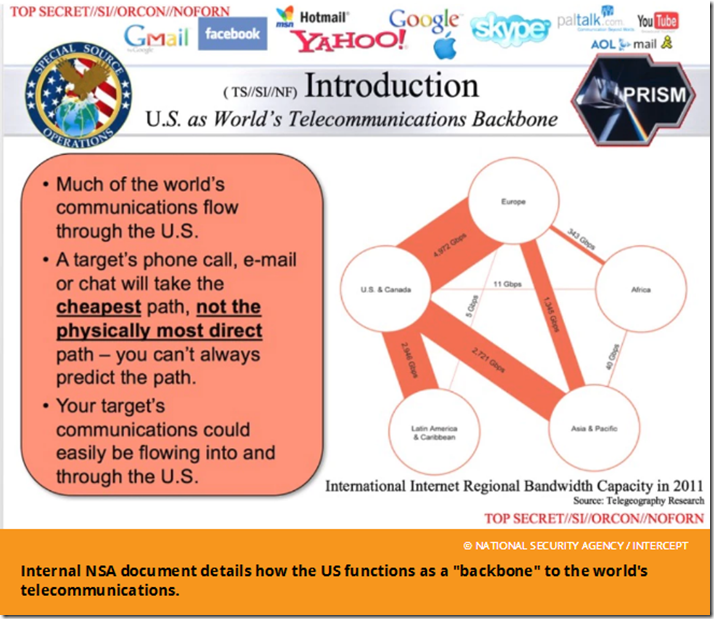 These “peering” sites enable the NSA to collect “not only AT&T’s data, they get all the data that’s interchanged between AT&T’s network and other companies,” Mark Klein, a former AT&T line technician at the company’s San Francisco office, told the Intercept. Klein blew the whistle in 2006 on the NSA’s installation of eavesdropping hardware in a room in its building in San Francisco.

The NSA’s collaboration through the data-gathering program, codenamed FAIRVIEW, is reportedly confined to AT&T. However, some of the facilities used by AT&T are shared facilities that also provide services to other telecom firms like Verizon.

Neither the NSA nor AT&T would confirm the Intercept’s reporting, although a number of former AT&T employees did, and the spy agency praised the company for its “extremely willingness to help.” The revelations come from documents exposing FAIRVIEW that were leaked to Intercept editor Glenn Greenwald by whistleblower Edward Snowden in May 2013.

In the documents, the spy agency said the company was even “aggressively involved” in supporting the data collection program. Under the FAIRVIEW program, both organizations worked hand-in-hand to create a communications ranking system that flags information and relays it to the government.

According to the spy agency, the program is a “cooperative effort” with a “partner [that] operates in the US, but has access to information that transits the nation and through its corporate relationships provide unique access to other telecoms and [internet service providers].”

Among the “unique aspects” clarifying the program’s capabilities is “access to massive amounts of data,” formerly secret NSA documents show.

The eight sites were developed under the guidance of an engineer by the name of Hossein Eslambolchi, a former chief technology officer at the company. He told The Intercept that the company had asked him to create the “largest internet protocol network in the world.”

Filtering equipment is also installed on AT&T’s networks to keep US citizens’ data out of the government’s hands, as it would be unconstitutional for the agency to review Americans’ data without a warrant.

However, in 2005 under former President George W Bush’s administration, the agency was caught doing just that, the New York Times reported. Bush signed an order in 2002 that gave the NSA sweeping powers to eavesdrop on phone calls of people inside the US as part of an effort to track “dirty numbers” linked to terrorist groups. Meanwhile, Section 702 of the Foreign Intelligence and Surveillance Act (FISA) allows the government to obtain Americans’ records so long as it is “incidental” to the targeting of foreigners.

That’s allowed the NSA’s limited technology to soak up and store a vast amount of information. For instance, the database is designed to target “selectors,” like a name, IP address or phone number that is included on an NSA target list. When it finds the mention of one, the NSA “will acquire a copy of the entire inbox,” an NSA memo released by the Intercept states.

The newspaper also likened cyber weapons to nuclear weapons, claiming that “a huge potential for destruction has been built up and is awaiting deployment.”

Job title: (f)PHELLOW OF SOPHIA Profession: RESEARCHER Company: ANTHROOPISMOS Favorite quote: "ITS TIME FOR KOSMOPOLITANS(=HELLINES) TO FLY IN SPACE." Interested in: Activity Partners, Friends Fashion: Classic Humor: Friendly Places lived: EN THE HIGHLANDS OF KOSMOS THROUGH THE DARKNESS OF AMENTHE
View all posts by sooteris kyritsis →
This entry was posted in Computers and Internet and tagged DRONES, Facebook, Google, INTERNET, Next Wave of the Internet, Project Loon balloons, SYNNET. Bookmark the permalink.