NASA published photos of the reverse side of the Sun, on which three UFOs were spotted. The photos were taken by STEREO spacecraft.

The camera mounted on the white corolla COR2 telescope captured three cylindrical objects that were moving one after the other along the same trajectory at the same speed. A source of light is seen on one of the UFOs – the light can be either a sun-reflective element or an object that accompanied the group of unidentified flying objects.

Ufologists said that the objects on the photos are huge. According to them, they are several times the size of the Earth. The speed, with which the objects were moving was incredible as well as the next photo taken by STEREO spacecraft did not show any of them.

or Spaceship Moon hypothesis, proposes that Earth’s Moon is either wholly hollow or otherwise contains a substantial interior space. No scientific evidence exists to support the idea; seismic observations and other data collected since spacecraft began to orbit or land on the Moon indicate that it has a thin crust, extensive mantle and small, dense core, although overall it is much less dense than Earth.

The Hollow Moon concept is similar to the better-known Hollow Earth hypothesis, which was a recurring plot device in pre-spaceflight science fiction. The first discussion of a hollow Earth was by scientist Edmond Halley in 1692, with the first mention of a hollow Moon being in H. G. Wells’ 1901 novel The First Men in the Moon.

The Hollow Moon hypothesis is the suggestion that the Moon is hollow, usually as a product of an alien civilisation.[1][2] It is often called the Spaceship Moon hypothesis,[1][2] and often corresponds with beliefs in UFOs or ancient astronauts.[2][3]

The suggestion of a hollow moon first appeared in science fiction, when H. G. Wells wrote about a hollow moon in his 1901 book The First Men in the Moon.[1][4] The concept of hollow planets was not new; Wells borrowed from earlier fictional works that described ahollow Earth, such as the 1741 novel Niels Klim’s Underground Travels by Ludvig Holberg.[5] Academic proposals for a hollow Earth pre-dated that. Edmond Halley’s hypotheses, advanced in 1692,[6] was the first one to specify an actual void in the Earth.[7]

Greek mythology, with its Hades, and early religious concepts of an underworld, such as the Christian Hell, contributed to ideas of the Earth being hollow.[8]

In 1970, Michael Vasin and Alexander Shcherbakov, of what was then the Soviet Academy of Sciences, advanced a thesis that the Moon is a spaceship created by unknown beings.[2] The article was entitled “Is the Moon the Creation of Alien Intelligence?”, and was published in Sputnik,[10] the Soviet equivalent of Reader’s Digest.[1][14]

Their hypothesis relies heavily on the suggestion that large lunar craters, generally assumed to be formed from meteor impact, are generally too shallow and have flat or even convex bottoms. They hypothesized that small meteors are making a cup-shaped depression in the rocky surface of the moon while the larger meteors are drilling through a rocky layer and hitting an armoured hull underneath.[15]

The authors reference earlier speculation by astrophysicist Iosif Shklovsky, who suggested that the Martian moon Phobos was an artificial satellite and hollow; this has since been shown to not be the case. Sceptical author Jason Colavito points out that all of their evidence is circumstantial, and that in the 1960s the atheistic Soviet Union promoted the ancient astronaut concept in an attempt to undermine the West’s faith in religion.[2]

Between 1972 and 1977, seismometers installed on the Moon by the Apollo missions recorded moonquakes. The Moon was described as “ringing like a bell” during some of those quakes, specifically the shallow ones.[16] This phrase was brought to popular attention in March 1970,[1] in an article in Popular Science.[17] When Apollo 12 deliberately crashed the Ascent Stage of its Lunar Module onto the Moon’s surface, it was claimed that the Moon rang like a bell for an hour, leading to arguments that it must be hollow like a bell.[1] Lunar seismology experiments since then have shown that the lunar body has shallow moonquakes that act differently from quakes on Earth, due to differences in texture, type and density of the planetary strata, but there is no evidence of any large empty space inside the body.[16]

The fact that the Moon is less dense than the Earth is advanced as support for it to be hollow. The moon’s mean density is 3.3 gm/cm3 whereas the Earth’s is 5.5 gm/cm3.[15] One explanation of this discrepancy is that the moon may have been formed by a giant impact which ejected some of the early Earth’s upper crust into its orbit.[4][18] The Earth’s upper mantle and crust are less dense than its core.[19] 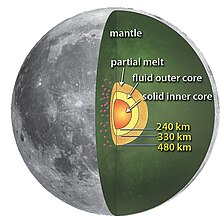 Schematic cross-section of theinternal structure of the Moon

Cornell University‘s Ask an Astronomer, run by volunteers in the Astronomy Department,[20] answered the question “Can we prove that the Moon isn’t hollow?”. There, physicist Suniti Karunatillake suggests that there are at least two ways to determine the distribution of mass within a body. One involves moment of inertia parameters, the other involves seismic observations. In the case of the former, Karunatillake points out that the moment of inertia parameters indicate that the core of the moon is both dense and small, with the rest of the moon consisting of material with nearly-constant density. As for the latter, he notes that the moon is the only planetary body besides Earth on which extensive seismic observations have been made. These observations have constrained the thickness of the moon’s crust, mantle and core, suggesting it could not be hollow.[21]

As most credible UFOlogists readily admit, proving that extraterrestrial spacecraft have visited our planet is a maddeningly difficult chore.

“The hassle over the word ‘proof’ boils down to one question: What constitutes proof?” Edward J. Ruppelt, who headed the U.S Air Force’s secret investigation of UFOs in the early 1950s, once wrote.  “Does a UFO have to land at the River Entrance to the Pentagon, near the Joint Chiefs of Staff offices? Or is it proof when a ground radar station detects a UFO, sends a jet to intercept it, the jet pilot sees it, and locks on with his radar, only to have the UFO streak away at a phenomenal speed? Is it proof when a jet pilot fires at a UFO and sticks to his story even under the threat of court-martial? Does this constitute proof?”

More recently, Investigative journalist Leslie Keen, author of the 2011 book “UFOs: Generals, Pilots and Government Officials Go on the Record,” has noted that  in roughly 90 to 95 percent of UFO sightings, observers turn out actually to have seen weather balloons, ball lightning, flares, aircraft, and other mundane phenomena.  But another five to 10 percent of sightings are not so easily explainable, but that’s not the same as demonstrating that they are extraterrestrial in origin. Nevertheless, she argues, the hypothesis that UFOs are visitors from other worlds “is a rational one, and must be taken into account, given the data that we have.”

Here is some of the most compelling reasons that UFOs may be more than simple misidentifications of natural phenomena or terrestrial aircraft:

• The long, documented history of sightings. UFOs were around, in fact, long before humans themselves took to the air. The first account of a UFO sighting in America was back in 1639, when Massachusetts colony governor John Winthrop noted in his journal that one James Everell, “a sober, discreet man,” and two other witnesses watched a luminous object fly up and down the Muddy River near Charlestown for two to three hours. There are documented sightings of what were then called “airships” during the 1800s as well, such as the July 1884 sighting of a Saturn-shaped UFO (a ball surrounded by a ring) in Norwood, NY, and a fast-moving object that briefly hovered over the startled townspeople of Everest, KS in 1897.

• Numerous modern sightings by credible, well-trained professional observers. In Ruppelt’s 1955 book , “The Report on Unidentified Flying Objects,”  he documented numerous instances of military service members, military and civilian pilots, scientists and other credible professionals who had observed UFOs. In one instance, Ruppelt describes the experience of a pilot of an Air Force F-86 fighter jet, who was scrambled to track a UFO and got to within 1,000 yards of a saucer-shaped object that abruptly flew away from him in a burst of speed after he fired upon it.   He also mentions a 1948 UFO encounter in which two airline pilots got to within 700 feet of a UFO and saw two rows of windows with bright lights.

• Consistencies in the descriptions of purported alien ships. Over the decades, witnesses who’ve seen UFOs have shown remarkable consistency in the shapes and other characteristics of the objects they’ve described.  In 1949, the authors of the report for Project Sign, one of the early military investigations of UFOs, identified four main groups of objects—flying disks or saucers, cigar or torpedo-shaped craft without wings or fins, spherical or balloon-shaped objects that were capable of hovering or flying at high speed, and balls of light with no apparent physical form that were similarly maneuverable.  Nearly a quarter-century later, a French government investigation headed by Claude Poher of the National Center for Space Research found similar patterns in more than 1,000 reports from France and various countries.   One caveat is that in recent years, reports of wedge-shaped UFOs—which bear a similarity to the latest terrestrial military aircraft—have begun to supplant some of the traditional shapes.

• Possible physical evidence of encounters with alien spacecraft. The 1968 University of Colorado report, compiled by a team headed by James Condon, documented numerous instances of areas where soil, grass, and other vegetation had been claimed by witnesses to have been flattened, burned, broken off, or blown away by a UFO.   A report by Stanford University astrophysicist Peter Sturrock, who led a scientific study of physical evidence of UFOs in the late 1990s, describes samples of plants taken from a purported UFO landing site in France in 1981. French researchers found that the leaves had undergone unusual chemical changes of the sort that could have been caused by powerful microwave radiation—which was even more difficult to explain, considering that they found no trace of radioactivity at the site.

• Physiological effects on UFO witnesses. The Sturrock report describes in detail various symptoms reported by individuals who had encountered UFOS, ranging from burns and temporary deafness to persistent nausea and memory loss.  Among the most vivid examples:  Betty Cash, Vickie Landrum and Landrum’s young grandson Colby, who reportedly happened upon a “large, diamond-shaped object” hovering over a Texas road in December 1980. All three became ill afterward;  Cash, for example, developed large water blisters on her face and swelling that closed her eyes, in addition to severe nausea and diarrhea. The effects persisted for years, and she was hospitalized more than two dozen times.