A proposal for Juno to observe the volcanoes of Io 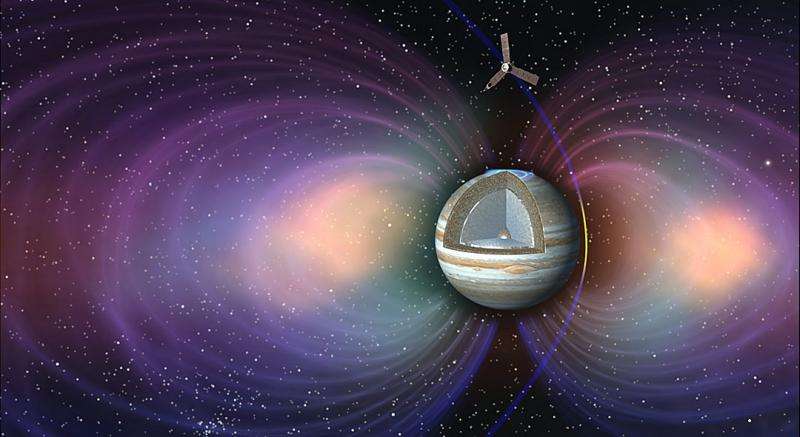 Jupiter may be the largest planet in the solar system with a diameter 11 times that of Earth, but it pales in comparison to its own magnetosphere. The planet’s magnetic domain extends sunward at least 3 million miles (5 million km) and on the back side all the way to Saturn for a total of 407 million miles or more than 400 times the size of the sun.

If we had eyes adapted to see the Jovian magnetosphere at night, its teardrop-like shape would easily extend across several degrees of sky! No surprise then that Jove’s magnetic aura has been called one of the largest structures in the solar system.

Io, Jupiter’s innermost of the planet’s four large moons, orbits deep within this giant bubble. Despite its small size—about 200 miles smaller than our own moon—it doesn’t lack in superlatives. With an estimated 400 volcanoes, many of them still active, Io is the most volcanically active body in the solar system. In the moon’s low gravity, volcanoes spew sulfur, sulfur dioxide gas and fragments of basaltic rock up to 310 miles (500 km) into space in beautiful, umbrella-shaped plumes.

Once aloft, electrons whipped around by Jupiter’s powerful magnetic field strike the neutral gases and ionize them (strips off their electrons). Ionized atoms and molecules (ions) are no longer neutral but possess a positive or negative electric charge. Astronomers refer to swarms of ionized atoms as plasma.

A 5-frame sequence taken by the New Horizons spacecraft in May 2007 shows a cloud of volcanic debris from Io’s Tvashtar volcano. The plume extends some 200 miles (330 km) above the moon’s surface. Credit: NASA/Johns Hopkins University Applied Physics Laboratory/Southwest Research Institute

Jupiter rotates rapidly, spinning once every 9.8 hours, dragging the whole magnetosphere with it. As it spins past Io, those volcanic ions get caught up and dragged along for the ride, rotating around the planet in a ring called the Io plasma torus. You can picture it as a giant donut with Jupiter in the “hole” and the tasty, ~8,000-mile-thick ring centered on Io’s orbit.

That’s not all. Jupiter’s magnetic field also couples Io’s atmosphere to the planet’s polar regions, pumping Ionian ions through two “pipelines” to the magnetic poles and generating a powerful electric current known as the Io flux tube. Like firefighters on fire poles, the ions follow the planet’s magnetic field lines into the upper atmosphere, where they strike and excite atoms, spawning an ultraviolet-bright patch of aurora within the planet’s overall aurora. Astronomers call it Io’s magnetic footprint. The process works in reverse, too, spawning auroras in Io’s tenuous atmosphere.

Io is the main supplier of particles to Jupiter’s magnetosphere. Some of the same electrons stripped from sulfur and oxygen atoms during an earlier eruption return to strike atoms shot out by later blasts. Round and round they go in a great cycle of microscopic bombardment! The constant flow of high-speed, charged particles in Io’s vicinity make the region a lethal environment not only for humans but also for spacecraft electronics, the reason NASA’s Juno probe gets the heck outta there after each perijove or closest approach to Jupiter. 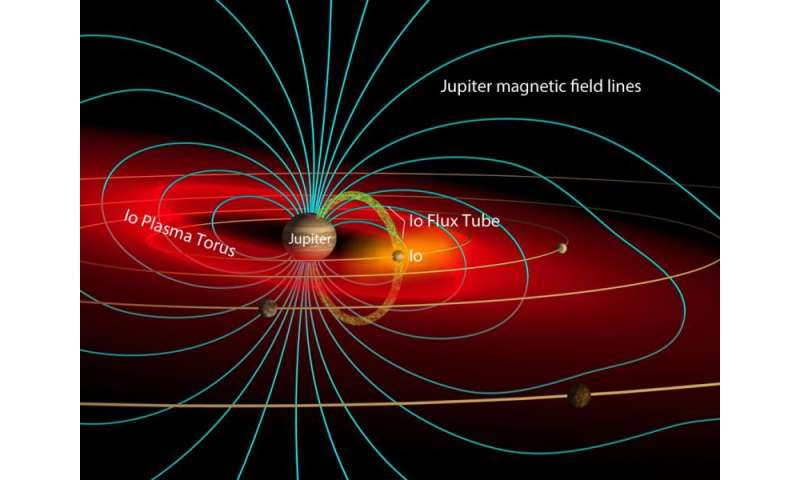 This schematic of Jupiter’s magnetic environments shows the planets looping magnetic field lines (similar to those generated by a simple bar magnet), Io and its plasma torus and flux tube. Credit: John Spencer / Wikipedia CC-BY-SA3.0 with labels by the author

But there’s much to glean from those plasma streams. Astronomy PhD student Phillip Phipps and assistant professor of astronomy Paul Withers of Boston University have hatched a plan to use the Juno spacecraft to probe Io’s plasma torus to indirectly study the timing and flow of material from Io’s volcanoes into Jupiter’s magnetosphere. In a paper published on Jan. 25, they propose using changes in the radio signal sent by Juno as it passes through different regions of the torus to measure how much stuff is there and how its density changes over time.

The technique is called a radio occultation. Radio waves are a form of light just like white light. And like white light, they get bent or refracted when passing through a medium like air (or plasma in the case of Io). Blue light is slowed more and experiences the most bending; red light is slowed less and refracted least, the reason red fringes a rainbow’s outer edge and blue its inner. In radio occultations, refraction results in changes in frequency caused by variations in the density of plasma in Io’s torus. 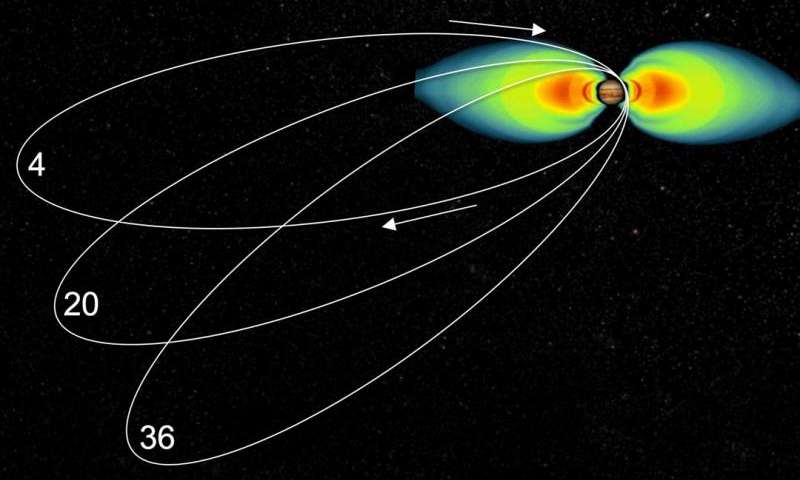 The tilt of Juno’s orbit relative to Jupiter changes over the course of the mission, sending the spacecraft increasingly deeper into the planet’s intense radiation belts. Orbits are numbered from early in the mission to late. Credit: NASA/JPL-Caltech

The best spacecraft for the attempt is one with a polar orbit around Jupiter, where it cuts a clean cross-section through different parts of the torus during each orbit. Guess what? With its polar orbit, Juno’s the probe for the job! Its main mission is to map Jupiter’s gravitational and magnetic fields, so an occultation experiment jives well with mission goals. Previous missions have netted just two radio occultations of the torus, but Juno could potentially slam dunk 24.

Because the paper was intended to show that the method is a feasible one, it remains to be seen whether NASA will consider adding a little extra credit work to Juno’s homework. It seems a worthy and practical goal, one that will further enlighten our understanding of how volcanoes create aurorae in the bizarre electric and magnetic environment of the largest planet. 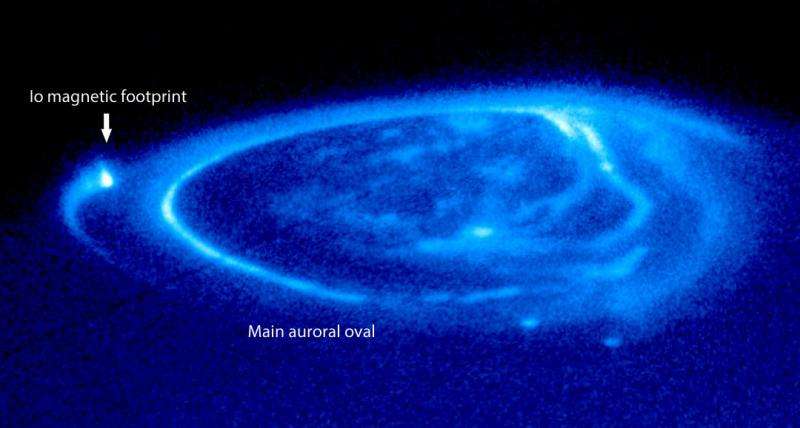 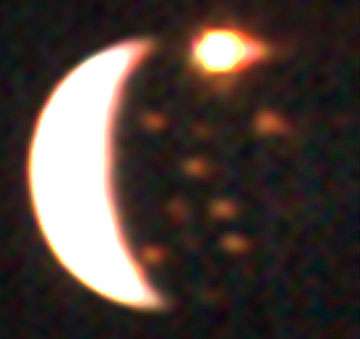 New Horizons took this photo of Io in infrared light. The Tvastar volcano is bright spot at top. At least 10 other volcanic hot spots dot the moon’s night side. Credit: NASA/JHUPL/SRI