Another important genre of literature in which music played a   significant part was what the Greeks called lyric poetry. Whatever nuances the words ‘lyric’ and ‘lyrical’ may have for us, for them it simply meant a  song to be sung to the accompaniment of a lyre-type instrument. From an  early date this type of composition divided into two branches, known as  the monodic lyric and the choral lyric. Monodic means ‘sung solo’, and in this type of song we find the earliest attempts to express personal
emotion and to make personal comment on life, mankind and the  contemporary scene. The two most famous composers of such lyric were  Alkaios and Sappho, who both lived on the island of Lesbos in the early  sixth century BC. Alkaios wrote songs about contemporary politics and  the state of the world, and how a man might best react to it. Sappho, one  of the very few women whose poetry has been preserved (though only in  brief fragments) wrote highly evocative and atmospheric songs, some of  them telling of her passionate feelings towards women. For the Greeks, the proper medium for this type of subject was the song, sung solo by the  poet, who accompanied himself (or herself) on a lyre. There is a well-known  vase-painting, thought by some17 to be by the Brygos painter,dating from the early fifth century BC, which shows Sappho and Alkaios,both holding lyre-type instruments (Figure 1.8).
In addition to composing the appropriate music, Alkaios and Sappho  each invented a pattern of rhythms for their songs, in the form of a stanza  which came to be named after them. They did not, however, confine  themselves to ‘their own’ rhythms, but used a range of metres, with lines  of various lengths. Though not a single note of their music survives, we  may be fairly confident that the distinctions, of what the Greeks later  called ethos, between music for different moods and for different  sentiments began to be drawn from this time onwards; the slow, sad  music of Sappho lamenting her parting from a loved one would have had  a very different pattern of notes, and a different style of melody, from one  of Alkaios’ stirring calls to his fellow-citizens to put right their political  wrongs. 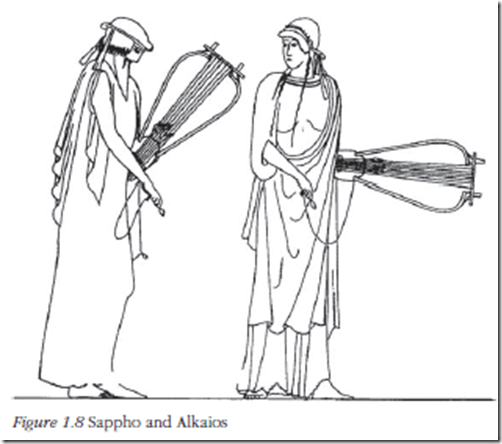 Instead, they tended to use a very selective technique, picking out the  moments of climax in the story and presenting them graphically, dwelling  on the emotions of the people concerned, and leaving out the mundane  details. In fact, the poet often assumes that the listener is familiar with the  essentials, and can be relied upon to fill in quite large gaps in the  narrative. The same technique was employed by Pindar in those stanzas  of his victory odes in which he tells an illustrative or admonitory story.
There could hardly be a sharper contrast with the rather prosaic, matter of  fact way in which (to give one example among many) the god Apollo  speaks of the events leading up to the opening scene of Euripides’  Alcestis, spelling out the details and explaining the situation in a way  which might have tried the patience of the quicker minds in the audience.
However, the loss of the narrative function from the choros songs was  partly compensated for by a simplification of their role. In some of the  early plays there is an awkward inconsistency between some passages in  which the choros sing of events with the poet’s own understanding and  interpretation, and other passages in the same play where they appear to  be bewildered and mistaken. In the later dramatists, though they expound  a good deal of generalized morality, they do not stand apart from, nor
always fully understand, the action which they see on the stage.
Sophocles is particularly fond of exploiting the irony of a situation in  which the choros believe that events are moving to a happy conclusion  when the true parentage of Oedipus is about to be revealed, or when  Creon decides to rescue Antigone from the cave in which she is  imprisoned. Their elation and joy would be closely reflected in the  musical setting of their song and in their dance movements, and both  would contrast sharply with the dirge-like tones and movements of the  next song—in the Oedipus Tyrannos when they reflect on the awful truth  that has been told, and in the Antigone when Creon returns with the  body of his son.
So far we have mentioned only two ‘modes’ in Greek tragedy—the   dance-songs of the choros and the spoken words of the actors. There was  another, which might be described as intermediate between the two. It is  indicated by words written in a metre called ‘anapaest’, which consists of  short lines, usually twelve syllables, in the rhythm  (for more details see Chapter 4, pp. 117). Groups of these lines may be  organized in two different ways, one of which was apparently ‘recited’ and  the other sung. We have evidence that some passages in comedies written  in this metre were accompanied by an aulos, and on this basis it is  generally assumed that similar passages in tragedy were so performed. We  cannot be sure whether the words were sung, chanted or spoken, but there  is one argument from probability which may be useful. The power of the  speaking voice is very much less than that of the singing voice, and (as we  shall see in Chapter 2) the notes of the aulos were loud and penetrating. It  is likely that even a choros of twelve or fifteen men speaking would have  been drowned by the accompaniment, and not clearly audible.26 I am  therefore inclined to believe that the words were chanted, perhaps on one  note, or on a short, simple repeating pattern of notes. 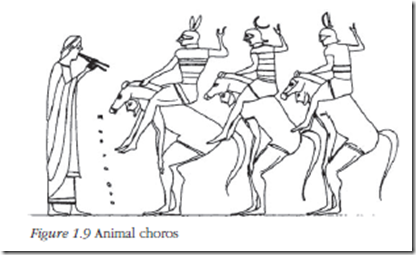 17 Act 1 scene 2, lines 96–157.
18 In Herodotus’ account of the emigration of the Etruscans from Asia Minor, he says that  they went ‘to the territory of the Ombrikoi’ who must surely be the Umbrians. The  Etruscans eventually occupied the corresponding area to the west of the Apennines.
19 It is highly probable that the actors in Atellan plays, like those in the  Commedia dell’Arte, had a one-page summary of the plot pinned to the  scenery, by which they reminded themselves of the next scene as they came  on stage. It is the origin of our word ‘scenario’.
20 Horace, in Epistles II, 1, 170 ff. compares him to a ‘Dossennus’ —perhaps a   hunchback villain—among his ‘greedy parasites’. Plautus’ middle name,Maccius, sounds suspiciously like Maccus, the buffoon character.
21 Pro Murena ch. 12 para. 26.
22 Naples, National Museum cat. 6687, Fleischhauer MGB Plate 52.
23 De Re Rustica, I, 2, para. 15–17.
24 For a concise and clear account of their views on science, and those of their  rivals the Epicureans, see G.E.R.Lloyd, Greek Science after Aristotle ch. 3(Chatto & Windus, London 1973).
25 Their opinions are preserved in Diogenes Laertius (Bk VII, 158) probably  referring to Zeno (333–261 BC) or Chrysippus (282–206 BC), and in more detail  in Plutarch’s Placita Philosophorum IV, 19, 4 (in Plutarch’s text 902B– 903A).
26 Barker II p. 99 n.3.
27 A detailed account of this system can be found in my article ‘Assisted  Resonance in Ancient Theatres’, in Greece and Rome XIV (1967):80–94.
28 See Elizabeth Rawson, Intellectual Life in the Late Roman Republic (Duckworth,London 1985), especially pp. 168–169. Andrew Wallace-Hadrill, in his review   article, is equally dismissive. A.T.Hodge, in Roman Aqueducts and Water  Supply (Duckworth, London 1992) is even more derogatory, comparing  Vitruvius’ work to a ‘poor undergraduate essay’ (p. 15) and seeming to
castigate Frontinus for not having used decimals centuries before they were  invented (p. 296). This is totally unjustifiable. Unfortunately, the most easily  available Latin text of Vitruvius—in the Loeb Classical Library, edited by  F.Granger—is not always accurate or reliable.

Job title: (f)PHELLOW OF SOPHIA Profession: RESEARCHER Company: ANTHROOPISMOS Favorite quote: "ITS TIME FOR KOSMOPOLITANS(=HELLINES) TO FLY IN SPACE." Interested in: Activity Partners, Friends Fashion: Classic Humor: Friendly Places lived: EN THE HIGHLANDS OF KOSMOS THROUGH THE DARKNESS OF AMENTHE
View all posts by sooteris kyritsis →
This entry was posted in Music and tagged MUSIC IN ROME, MUSICA ANCIENT GREECE. Bookmark the permalink.