The Economic History of Byzantium: From the Seventh through the Fifteenth Century (I)

The Byzantine Empire in the sixth century remained a power that encompassed the
whole Mediterranean basin following Justinian’s costly campaigns of reconquest. The
barbarians nonetheless still held the Gallic territories and most of the Iberian peninsula,
as well as Noricum and Pannonia. The Danubian limes, breached regularly from
the fourth century on, ceased to offer any protection to the dioceses of Dacia and
Thrace as of the 540s. The integration of Moesia II and of Scythia Minor into the
Quaestura Exercitus represented Justinian’s desperate attempt to protect the northern
flank of Constantinople and the Balkan peninsula.
To the east, the empire extended as far as Georgia (Iberia); to the southeast, it included
Martyropolis (Majafarqin) and Anastasioupolis (Dara), Nisibis having been left
to the Sasanians by Jovian in 363 after Julian’s disastrous eastern campaign. From the
Euphrates to the Red Sea, limitanei established in the forts of the Via Nova Trajana and
the Strata Diocletiana protected the provinces of Syria, Arabia, and Palestine, including
the Sinai peninsula and the eastern shore of the Gulf of Aila.1 Toward the middle
of the sixth century, menaced by the Persians, Justinian assembled his troops along the
northern frontier and entrusted the defense of the remaining area to the Ghassanid
phylarchs, without undermining its security or its economy, despite the halt of fortification
building and the departure of (ill-)paid troops.2 The Nile was Byzantine as far
south as Phile and the first cataract. Cyrenaica, a Byzantine territory that had been in
decline since the halcyon days of Synesios, was revitalized by Justinian’s western dream,
and harbors, walls, and churches in particular underwent a great renewal (in the cities
of Cyrene, Apollonias, Ptolemais, El Atrun, Berenice/Benghazi). To the north, in Crimea,
Cherson was a powerful Byzantine enclave,3 and in the Balkans, the Danube continued
to serve as a frontier.

The reconquest of the western shores of the Mediterranean constituted the Great
Idea of Justinian’s reign. The coasts of Tripolitania were quickly retaken, and cities
such as Sabratha, Oea-Tripoli, and Leptis Magna restored. The ancient provinces of
Byzacena, Africa Proconsularis, Numidia, and Mauritania Stifensis were wrested from
the Vandals and made defensible once more through the efforts of Salomon the patrikios.
The two coasts of the Strait of Gibraltar were Byzantine again as the result of the
capture of Andalusian territories in 552.4 The Baleares, Sardinia, Corsica, and Sicily
were quickly brought back into the Byzantine fold. Doing so proved more difficult,
however, with respect to Italy and Dalmatia: Belisarios and, later, Narses were forced
to fight toe-to-toe against Theodoric and his successors between 534 and 552.5
Throughout these territories milled Romanized and Christianized populations, who
recognized, in theory at least, the supremacy of the Byzantine emperor, received titles
and gifts from him, and furnished him with contingents of foederati: Visigoths and
Franks to the west, Absiles and Alans on the eastern flank of the Black Sea, Ghassanid
Arabs on the Transjordanian and Syrian limes. No serious or lasting invasion took place
in the former Pars Orientis of the Roman Empire after the third quarter of the fourth
century. The Roman network of land and sea routes remained passable to a great
extent, and the measures of John of Cappadocia regarding the cursus publicus had in
the short run no influence on the maintenance of the roads.6 This state of affairs, which
favored economic activity and exchange, lasted until the mid-sixth century. Moreover,
as we shall see, the trade networks exceeded—and did so by a great margin—areas
that were governed by political or diplomatic accords: Byzantine trade extended as far
as England to the west and to the east, by way of the Red Sea, as far as India.

The Decline of Italian Cities, the Stability of African Cities, and the Varying Prosperity of
Cities in the Pars Orientis (Fig. 1)
The long reconquest of Italy had led to irreparable damage. The population of Rome,
which at the beginning of the fourth century still numbered 600,000 to 700,000 inhabitants
according to Bernard Bavant (Jean Durliat puts the number at 800,000), fell to
200,000 (Bavant; Durliat: 350,000) after the raid of 410, and barely totaled 100,000
around the year 500. Immediately following Narses’ reconquest of Rome, the population
level tumbled to its demographic nadir: the city’s population in the seventh
century barely tipped 25,000 to 30,000 (Bavant; Durliat and Richard Krautheimer:
90,000). Having lost its aristocracy and a great number of its artisans and merchants,Rome became home to country folk and assumed a decidedly rustic character.7 All the  Italian cities were affected, with the possible exception of Ravenna, which had not   been captured and whose evolution, while similar, was differentiated to some extent  by virtue of its function as a regional capital and the importance of its ties to the East.
The cities of Liguria maintained contacts with Constantinople, as they did with Rome.
As of 568, however, the Lombard invasion began to tear Italy apart once again.8
To some extent, Africa got a better start. The reconquest was effected rapidly, without
harming the territory, and the Byzantine administration took steps to invest in it.
An entire program of fortification was completed with vigor and skill. Carthage was
the object of privileged treatment. The Wall of Theodosios was rebuilt and its moats
relaid. The great columned basilica at Byrsa, built by Antoninus Pius, was reconstructed
as a fortified monastery—a sign of the times. The Antonine baths, which had
lain decrepit during the fifth century, were rebuilt in the sixth. A portico graced the
circular harbor and sheltered artisans who specialized in textile work (the remains of
what is thought to have been the imperial gynaeceum have been found).9 Certain houses
seem to have been rebuilt during this period. The process of transformation took place
in other cities as well. At Timgad, at Djemila (Cuicul), and at Bulla Regia, new centers
were created, albeit on a less monumental scale. Baths were maintained at Setif and,
reconstructed in more modest form, lasted until the year 600. But these efforts came
to a sudden end. Private residences and shops sprang up in a number of fora. Agricultural
presses began to appear within towns.10 A progressive slowdown in activity and
in exchange, accompanied by demographic stagnation, developed during the seventh
century.

Cities inside Thrace and Moesia fell into decline beginning in the second half of the
fifth century, in spite of imperial support. No more than a few hundred inhabitants
populated Caricˇin Grad/Justiniana Prima, Illyricum’s aborted capital. The early Byzantine
surrounding wall at Nikopolis ad Istrum left little room for inhabitants, who  may have occupied the outskirts of the city.11 It was the cities on the shore of the Black  Sea that endured, such as Istria (whose perimeter narrowed, a fact that does not necessarily
imply a drop in the population) and Tomis; both maintained a very active trade
with Asia Minor. Cherson seems to have witnessed an expansion at the end of the sixth
century and the beginning of the seventh.12
Within Asia Minor and Syria-Palestine—the more populated and dynamic regions
of the empire—cities continued to prosper, at least until the middle of the sixth century.
The population of Constantinople at the start of the sixth century numbered
400,000 (or slightly more).13 We may reckon that of Antioch at approximately 200,000
prior to the earthquake of 526 (which killed 250,000 according to Malalas, 300,000 according
to Prokopios), a second quake in 528, and the deportation of its inhabitants by
the Persians in 540.14 Apameia supported a population of around 100,000, if not somewhat
more. Adarmanes, at the sack of the city in 573, with his 6,000 armored horsemen
and Lakhmid Arab auxiliary forces, withdrew with 200,000 captives.15 We may estimate
the population of Alexandria at no fewer than 100,000; so too for Thessalonike.
The population of Ephesos is not ascertainable, but must have been lower by only a
small margin.16 Caesarea in Palestine, Jerusalem, and Sardis17 would have had between
50,000 and 100,000 inhabitants. Gerasa, despite its fifteen churches, may have suffered
a demographic decline relative to the Roman period. A provincial capital such as Nikopolis
must have numbered from 30,000 to 35,000, as did Gortyna and, possibly, Beisan-
Scythopolis, where excavators posit a population of 30,000 to 40,000; the latter city
witnessed a significant program to rebuild public infrastructures, while private houses
and shops were restored.18 One may estimate the population of the city of Hermopolis  at between 25,000 and 50,000 inhabitants and that of a provincial Egyptian metropolis  of 80 ha2 at around 16,000.19
As a general rule, the coastal cities seem to have been densely populated through
the sixth century.20 Cyprus apparently had a sizable population up to the Arab invasion
of 648–649. An inscription at Soloi mentions the capture of 120,000 individuals, although
we cannot be certain whether these constitute the inhabitants of a single city
on the island or, more plausibly, of the island as a whole.21 The same held true for the
cities of the continental province of Arabia and their expansion into Palestine III as
far as Aila-Aqaba; these were extremely prosperous during the sixth and seventh centuries.
22 The cities were unequally distributed, despite the efforts of the emperors to
make their numbers grow in the less populous regions in order to foster greater administrative
and fiscal efficiency. City (polis) and countryside (chora) were mutually complementary
in the development of the territory of the city. Many landowners lived in
town, in particular the possessores,23 who administered the city together with the bishop
and the representative of the provincial administration. Agricultural production was
thus a fundamental element of urban prosperity.

The Concentration of Rural Sites in the Empire

Surveys conducted in diverse regions (Boeotia, the Argolid, southwestern Turkey, Cyprus,
Palestine, and Transjordan [Fig. 2]) reveal a highly advanced level of development.
In the Argolid, around the city of Hermione, sites clearly proliferated around
the fourth century A.D. and nearly matched the density of the fourth century B.C.24 New
sites sprang up on hillsides and in the high valleys—land that was highly conducive to  the cultivation of olives and in many cases had been unused prior to this period. By  contrast, a slight setback occurred in the region of Sparta, whereas certain urban centers
rose in importance.25
In Lycia the surveys conducted by R. Martin Harrison in the central part of the
region and by Frank Kolb around Kyaneai highlight the development of villages and
farms, as well as of farmed terraces, thus confirming the information provided in the
Life of St. Nicholas of Sion.26 In Cilicia, wealthy villages composed of spacious houses
endowed with agricultural presses, scattered somewhat haphazardly around churches,
began to develop as of the fourth century in a hinterland that was well connected to
the coast.27 In northern Syria, several hundred villages—the successors to estates—
arose between 300 and 550 in the limestone massif at the margins of the vast agricultural
area.28 The basaltic region to the northeast of Hama, at the edge of the steppe,
also witnessed a strong expansion in the number of villages and small cities during the
early Byzantine era.29
The growth of early Byzantine Cyprus was expressed in a widespread proliferation
of late Roman sites. Even in a region as marginal as Akamas, situated at the western
edge of the island, Hagios Kononas expanded from the fifth century until approximately
the middle of the sixth century.30 Elsewhere on the island, at Kalavasos-Kopetra
and Maroni-Petrera, the expansion flourished into the seventh century,31 and a survey
of the region of Amathos confirms the fact.32 A number of surveys of Transjordan indicate
a relatively significant density, in some cases exceptional, of early Byzantine sites.
Despite the margins of error inherent even in systematic studies, since they are limited
to the top strata, taken as a whole these surveys provide evidence of an unusual population
density in the countryside of the eastern diocese and a portion of the Aegean coast.
The cause was most probably a strong demographic pressure,33 but sudden population
movements may also have been a factor. 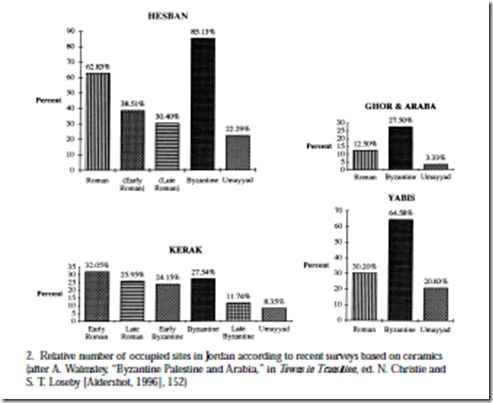